About a year ago,I started working with Balboa Gifted/High Ability Magnet Elementary School. The school hired me because they were looking for a person who will help them pursue new avenues in technology. The state of California was already experiencing one of its biggest financial crises,significantly affecting public schools and other state-sponsored programs and organization. My goal was to create a program that will be low-cost and effective.

At the time,I wasn’t at all acquainted with any web-based applications. I knew that many companies were working on web-based applications and that it was considered as the trend of the future. I also knew that they were not stable enough to compete with existing desktop applications. As a fierce advocate of project-based learning,I was looking for web-based productivity tools that would help students create projects that reflect what they are learning in the classroom,in one or multi-disciplines. Students can utilize the tools to construct knowledge,develop innovative products,search,evaluate,and analyze information,develop their critical thinking skills,communicate and work collaboratively. A combination of web 2.0 products,particularly Google applications,fit my goals best.

I started using Google Docs,Sites,Maps,Earth,Notebook,Sketchup and other web-based applications,such as:Mindomo–a mind mapping tool and Scratch–an animation and simulation tool. I spent hours experimenting with these applications and created project prototypes using a combination of these tools. The results and the possibilities for student learning surprised me. Soon enough I discovered that Google is offering Google Apps,which include:startup,e-mail,talk,calendar,documents,sites,and video,free for educational institutions. Google Maps,Sketchup,Notebook and Earth have their basic free version,as well as other Web 2.0 applications such as Mindomo and Scratch. These apps were all free and I was just required to set up 560 accounts for our 3rd to 5th graders,our faculty,and staff. I was then ready to start. 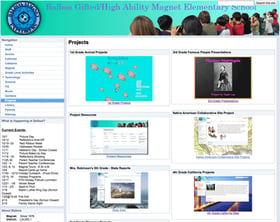 The outcome of this project is displayed at Balboa’s school website.

The site includes a rich ‘Projects‘section with student projects listed by Teacher Name. Students used a mix of different applications to create their projects. Some projects were done with non web-based application (MicroWorlds),but the output was converted to html and posted on the web. Most student projects were done with Google Apps and other existing Google applications such as Maps and Notebook. For example,5th grade students created web sites for each state in the United States. Our third graders worked on collaborative sites about Native Americans in which each team member worked on different aspects of their assigned tribe. Fourth graders worked on a web site dedicated to everything they learned about California,starting from the California regions,missions,and a mission focus. A few had time to work on the Gold Rush and map the Oregon Trail. This project was particularly interesting because students mapped the California’s twenty one missions on Google Maps,including an image and a description of each

mission on the map. When they finished mapping all missions,the students embedded their map in the ‘Misssions’page in their California site and linked it to the original map created with Google Maps. There are many other projects displayed on the site such as Google Presentations about Famous Americans.

Using Web 2.0 technology and Google Apps accounts has encouraged the creation of a new computer culture in our school. Students are frequenting the computer lab on lunch and break times to experiment,advance their projects or create new,original projects of their own. Our fifth graders enjoyed working with Google Apps so much that they asked permission to keep accessing their Balboa Magnet accounts even after they leave to Junior High School and I was happy to oblige them after Google granted us 200 additional accounts. I definitely feel that my students have really acquired many skills in technology and they feel very comfortable using those skills. Even our third graders (who I was afraid would have problems with logging into the system due to their age) are accessing their accounts without any problems. I feel that my students have established a foundation in technology this year in terms of mastering the basic skills. I now want them to use this foundation to further engage in different aspects of project-based learning.

Constructing Your Vision with DoInk

Constructing Your Vision with DoInk

Motivated to Succeed by Learning Robotics

Motivated to Succeed by Learning Robotics

Stay up-to-date on all things PBL and Project Pals

Be the first to know about new product features, exciting PBL research, and actionable tips and implementation strategies for PBL success in your school or district.